I hope you enjoyed my last post about walking up Goat Fell! It was our last full day in Arran and we wanted explore some more. So the Giants’ Graves and Glenashdale Falls in Whiting Bay were next.

I didn’t have a clue what the Giants’ Graves were … graves of mythical giants?

I had a wee look at our book and found out they were the burial place of people in the Neolithic times. Mmm … eery.

We found you could go two ways for this circular walk. We decided to walk the clockwise route and tackle the Giants’ Graves first as we knew it was an uphill walk. It was well signposted from the main road and free parking nearby. After a short walk through the woods, alongside the Glenashdale Burn, we came to a signpost for the Giants’ Graves. Large wooden steps spiralling up into the woods appeared before us.

As we started to make our way up I thought this should be no problem after Goat Fell the day before! The book said there were 337 steps. I lost count … I loved walking up these steps through the woodlands.

When we reached the top of the steps we walked uphill through a beautiful avenue of conifer trees. It was so quiet, except for the occasional noise from the trees creaking in the wind.

Finally we could see a clearing. This was where the Giants’ Graves lived, and whatever other ghostly souls that were still there!

The trees creaking in the wind added to the spookiness of where we were standing. I liked it though.

Three young girls from America appeared in the clearing not long after us and we offered them some bottled water which they were grateful for. The girls seemed to enjoy the atmosphere there too. I watched them sit on the grass and make flower chains for their heads. I thought they were going to dance round the stones next!

Whilst exploring and taking photos we noticed that one of the stones had carved writing on it. Possibly graffiti but something caught our attention.

“In memory of” with a list of around seven names.

We had a strange but nice moment … both our surnames were on that list! What were the chances of that? Fate or what? We both just looked at each other. Deep down I knew everything would work out just fine between us.

I still don’t know to this day who the people were on the stone.

We made our way back down through woods behind the American girls. I loved walking down the winding steps. The girls were skipping down them. The path to the Glenashdale Falls was next.

Before we journey to the Glenashdale Falls I want to let you know about the changing landscape at the Giants’ Graves.

We visited again in 2009 with my two children. I was a little upset to see the coniferous forest around the graves had been felled.

The unique wooden steps were gone and replaced with a dirt path.

I wanted to show my children the forest walk and the steps but it was too late. They’d need to wait about 30 years before any new native trees grew to a decent size.

I had to accept that things change and maybe one day my children would return with their children. I hope they do! On a plus side, you do have a fantastic view of the Holy Isle, the mountains and the mainland on a clear day.

As you can see from my 2009 photos above, deforestation really does look sad and desolate and feels like the end of the world. I’ve been back quite a few times over the years and try to remember to take a photo to show the changing landscape.

I returned with my sister in 2015 and was happy to see some greenery return again.

In 2019, trees, fern and wildflowers were beginning to take over again. The views across the island and to the Holy Isle are just beautiful.

After 13 years, we could still make out our two surnames on the stone slab. I always think to myself, what are the chances that you visit a place for the first time together and out of all the surnames in the world, two were ours.

Looking back at the landscape changing gives me hope that the current deforestation that’s taking place isn’t forever. Nature will thrive again, it just takes time.

We even found what was left of the old wooden steps in the woods, just off the new path. It was the same place where I stood watching the American girls skip down the steps!

I returned in 2022 to see the growth was thriving walking up the dirt path to the top of the hill. High fern on either side of the path with some pine trees coming back and getting taller.

Even at the graves the trees were beginning to hide the view to the Holy Isle. 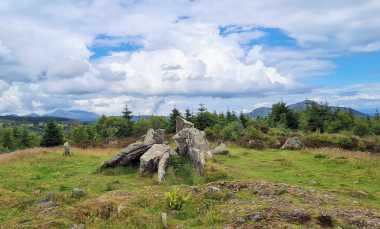 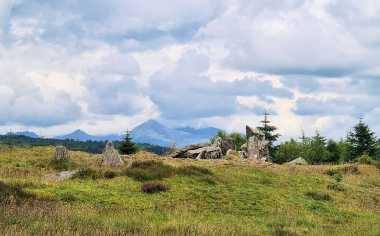 When we reached the Falls I was really impressed. They were larger than I thought and the sound was delightful to my ears. There was a viewing platform where you could get a bit closer and take plenty of photos.

With the amount of rain we get in Scotland the Falls are most impressive in the winter. I love the rain, well, most of the time I do! I decided to be adventurous and get closer to the Falls. Look at the viewing platform from this angle!

After the Falls we continued through the woods. We also saw an Iron Age Fort and another beautiful waterfall along the way. I don’t have many good photos from 2006 of the rest of the walk, but here are some that were taken one fine winter’s day in December 2014. 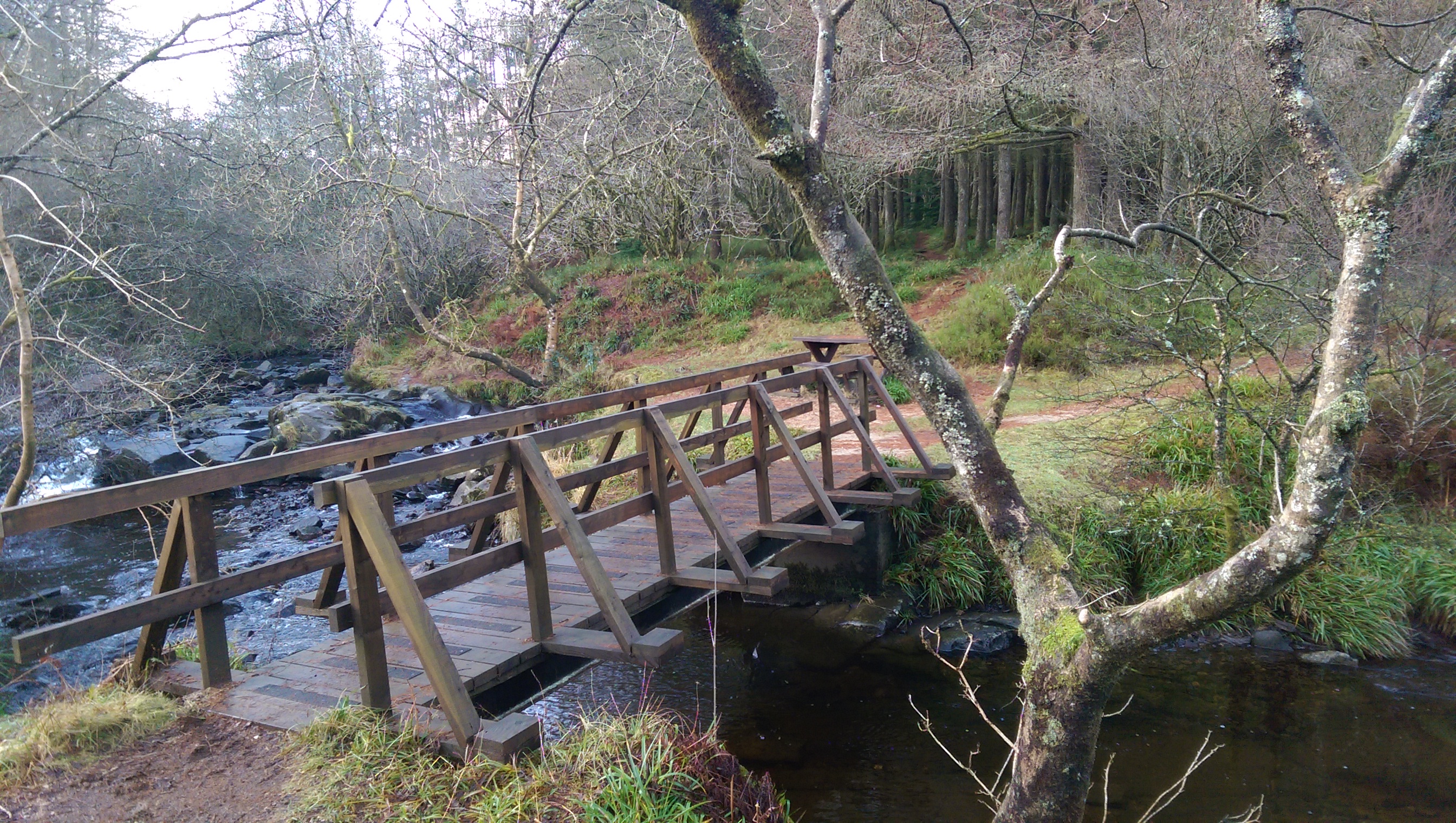 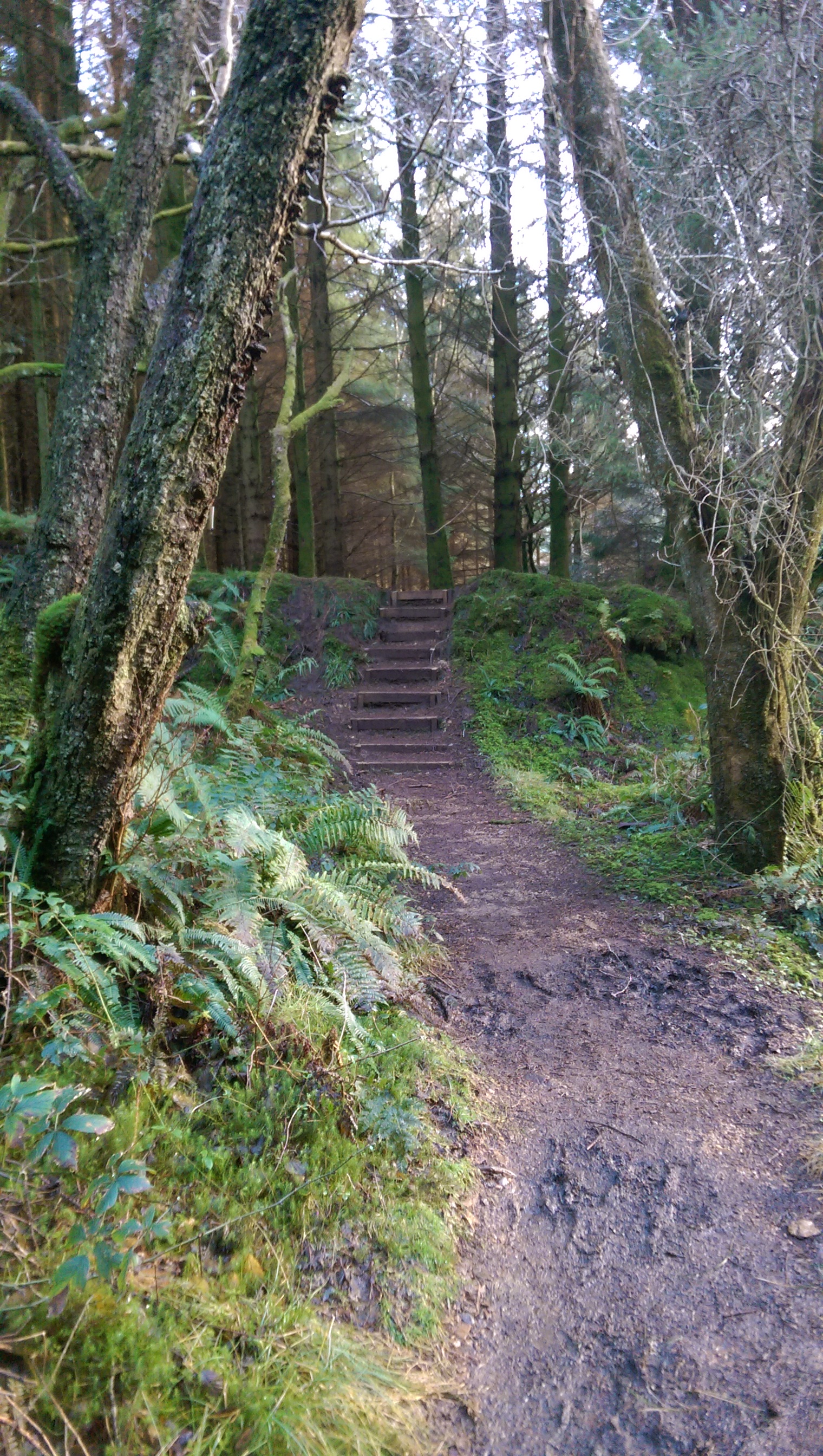 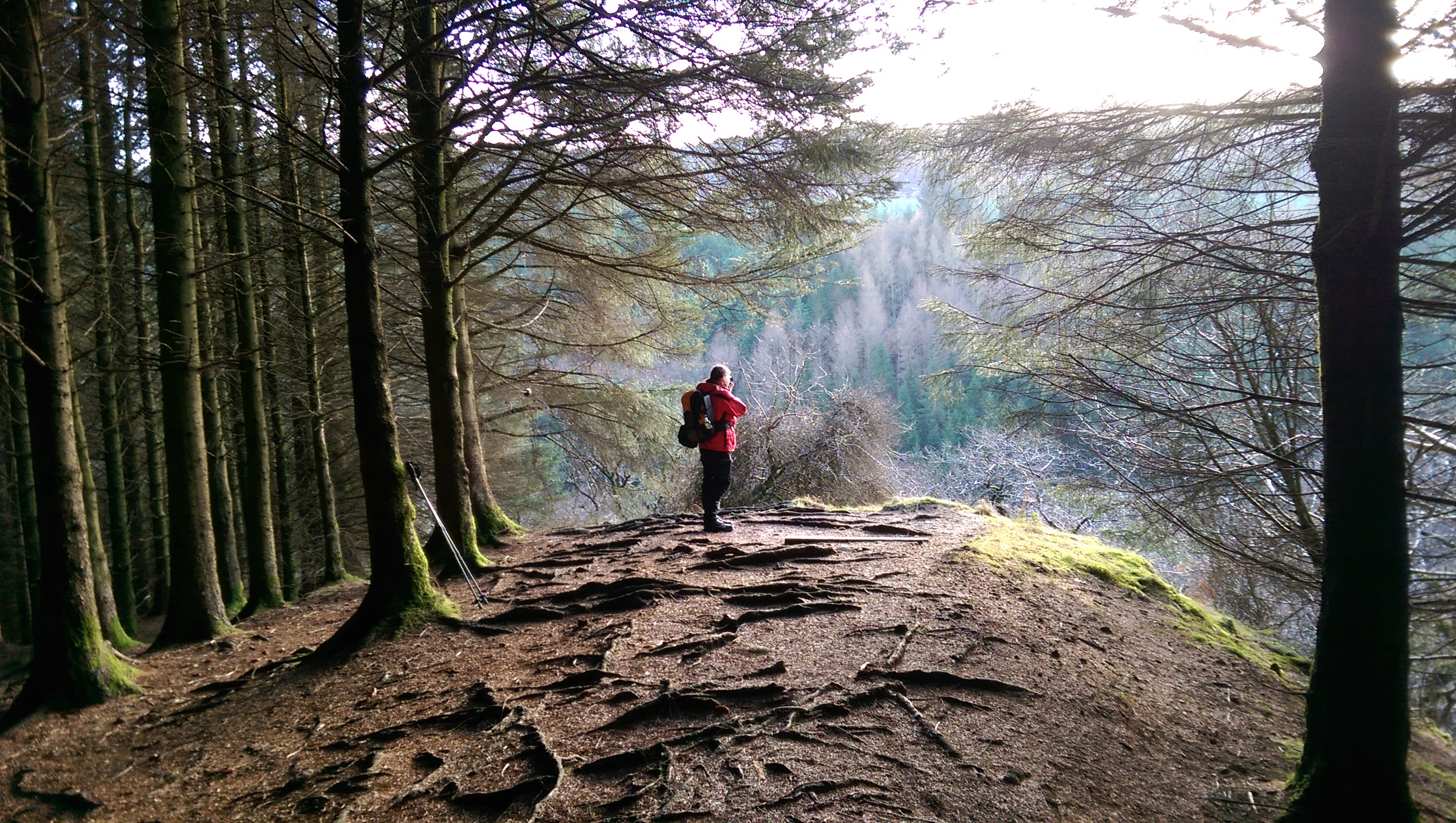 The Giants’ Graves and Glenashdale Falls is one of my favourite walks on Arran. It shows you so much natural loveliness and is only about 6km all round.

1 thought on “Walking on Arran: Giants’ Graves and Glenashdale Falls”