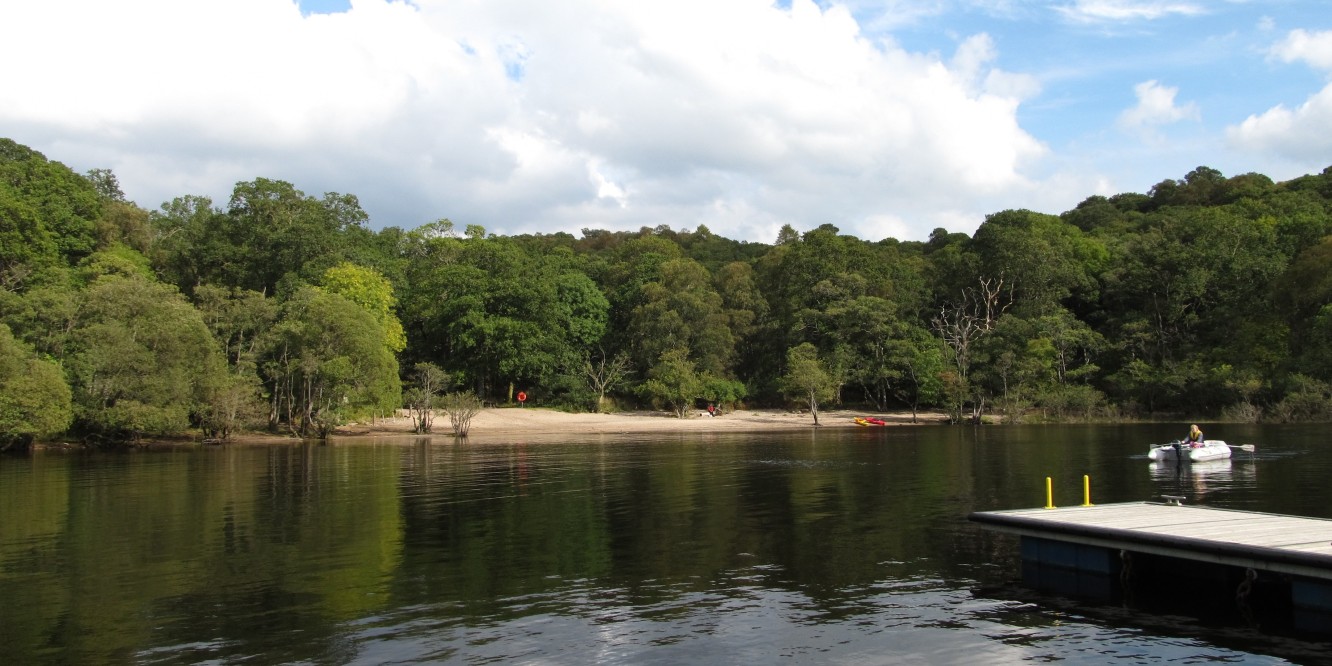 Inchcailloch island, meaning the ‘Isle of the Old Woman’ or I’ve seen ‘Isle of the Nun’, is a National Nature Reserve (NNR). It’s managed by the Loch Lomond and the Trossachs National Park Authority, with support from the Scottish Natural Heritage.

This unique secluded wooded island has always been on my revisit list. I really wanted to see the carpet of bluebells in May. I don’t know why I love them so much, I never really used to pay attention in my younger years, but now I seem to have new eyes and notice everything natural around me. I have blogged about the island before in a previous post but this time my children explored with me and I love that we experienced it together.

After our visit to Finnich Glen (Devil’s Pulpit) , that same day we headed to Balmaha, Loch Lomond. There was a mountain race taking place so the visitor centre car park was quite busy.

We eventually got parked though and found a lovely picnic table to have our packed lunch of rolls, tuna pasta, fruit and chocolate before heading over to the island. I was certainly feeling hungry after all the devilish exploring earlier!

I could see so many people sitting out enjoying the warmth of the sun, eating food and drinking cold drinks. It was really lovely to see this and great that our Scotland was having warmer weather for a change. We stopped off at the local shop for some much needed cold ice cream.

To sail across to the island you need to go to the little boatyard that sits behind the Oak Tree Inn. Alan and I have eaten here before a few years back when we camped nearby at Cashel Campsite, and had the pleasure of eating a tasty cooked breakfast. Usually we cook our own food when we’re camping but the campsite had run out of bacon … so that’s our excuse!

The boatyard is owned and managed by the Macfarlane family whose ancestors lie to rest peacefully on the island. It was £15 return for the four of us, two adults, two children and we arranged with the skipper to come back for us in two hours. This was enough time to explore the island and get back again to the pick up point.

If you’re not visiting the east side of the loch you can also sail from the west at the pretty conservation village of Luss.

We walked towards the jetty and reached the little wooden boat called ‘Lady Jean’.

I wish I had asked who Jean was, but the crossing was only five minutes and my daughter was loving that the skipper’s dog was travelling with us too.

We arrived at the north jetty after five minutes and I was ready to explore … bluebells. I’d brought two of my own too, not intentional!

We walked up the steps on to the island. The first time I visited here I remember thinking it felt like being in a movie, stranded on an island cut off from everything… what could happen? We quickly reached the signpost to decide which path to take. Mmm, decision time.

There are three different paths you can choose from to reach Port Bawn at the other side of the island:

Each path takes around 30-45 minutes.

We wanted a challenge, so the summit was the choice for us. I feel that you can’t visit an island and not reach the summit. We wouldn’t miss out on visiting the burial ground and farm ruins as we would see these on the way back.

So off we went. I was starting to realise that I couldn’t see many bluebells, some were starting to bud, but not the carpet of blue/purple I was hoping to see and smell. It’s so difficult to know when they are at their best as our seasons change so often in Scotland!

It’s a really good path to the summit and a short climb. My children were way in front and reach the top first. You’re rewarded with beautiful views across Loch Lomond.

Another lovely little bench is waiting for you at the top where you can sit, rest and enjoy the silence and take in the views. As with most benches we see on our travels it had a dedication plate on it. I love seeing dedication benches, it makes you think of the other people who have a great love for the place you’re visiting.

I was a little disappointed that the summit tree had been cut down. The last time we visited this tree was still standing and had a little face carved into it. I suppose it must have been sickly and needed to be chopped.

Alan managed to zoom in with his camera and take this photo of people climbing Conic Hill. It’s not a Munro but still 350m in height and a 4km hike. One for my list I think!

We found some bluebells at the top!  They look more purple to me though.

This little port is so pretty with its sandy beach. A large group of people with children and their camping gear arrived at the same time as us. They were staying the night! Camping on the island would be an amazing experience. Another one on my list!

We sat at one of the picnic tables and had a little chocolate snack, for walking energy. The ducks came along to say hello and enjoyed some of my blueberries.

We started to make our way around the other side of the island towards the burial ground.

We heard a noise in the trees a few times and then seen some fallow deer. They were too fast to capture a photo though.

We eventually reached the burial ground and went in for a peek. It kinda sounds like a sad thing to do but I like looking at the old headstones. It was such a peaceful resting place.

The ruins of the church date back to the early 13th century and legend says that nuns lived on the island. Whilst there is no evidence that a nunnery existed it’s known that St Kentigerna, an Irish saint, lived there in the early 8th century and died there in 733AD.

Inchcailloch was the burial ground for Clan McGregor with stone number 17 belonging to Gregor McGregor, clan chief and cousin of Rob Roy. There are lots of MacGregor stones but the most frequent name you will see is Macfarlane.

There’s a late 18th century account of a burial on the island in which the Highlanders drunk so much whisky that they almost forgot to bury the body. Some Scottish folktales also say that some bodies even got lost on the way there. That demon whisky!

Seemingly the drinking got so bad that in 1645 the General Assembly passed a law to stop this, but in 1701 as this was re-enforced it had no effect in stopping drunken send-offs. After funerals, mourners would just return to the deceased’s home for yet more drinking and eating.

Some burial customs in the 17th and 18th century were interesting. The body was washed and laid out at home wrapped in a shroud or winding sheet, or later in the period they were dressed. The face of the deceased was seen as it was important that visitors saw and touched the corpse.

A small dish of salt was placed on the chest of the deceased to keep away evil spirits. Clocks in the house were stopped, mirrors covered, domestic animals, especially cats, were put out of the house. It was believed that if they jumped over the deceased it would disrupt the flight of the deceased’s spirit or the next person to meet the animal would go blind or fall ill.

Back to the north jetty

We made our way down the steps towards the north jetty to catch the boat. We found more bluebells but still not in full bloom

It was a lovely wee day out and we fit quite a lot in! Looks like I’ll need to go back again and catch those bluebells in full bloom though.

I went back on 19 May 2018 with my husband and also met up with my lovely blogger friend Susanne from Adventures Around Scotland. At last I saw the bluebells in full bloom! Watch my short video:

There are lots of other places to explore in Balmaha, and all over Loch Lomond, from easy walks to more challenging ones.

If you visit the Loch Lomond and the Trossachs website you can find out more about these beautiful places.

7 Replies to “Inchcailloch Island ~ Isle of the old woman”