I love that we have seasons. They might be a little bit out of season these days, but we’re still lucky to see the changing landscape around us here in Scotland. I think of it as a natural magical changing land.

The once green leaves on the trees are showing us their true autumn colours. They fall off their branches and carpet our land in red, gold, brown and yellow.

The autumn colours where I live in Ayrshire are still finding themselves though … so many green leaves and fern are still lingering in the hope that they can stay a little longer. Don’t they know that winter is coming! It has been really mild weather, so possibly this is confusing nature a little.

At the beginning of October we drove up north to Perthshire for the day. I’d heard that Perthshire is a must see place, especially in autumn. This shire is also known as big tree country.  Autumn wasn’t quite ready for us, so we returned at the end of October to capture its stunning magic. I’ll show you a mix of photos from both trips.

Watch a video of Perthshire

You can also have a wee look at a video I made of our visit to Perthshire. I hope you enjoy it along with my story and photos below.

The Hermitage in Dunkeld is one of the oldest tourist attractions in Scotland. It has been a popular place to visit for over 200 years and was designed as a pleasure ground in the 18th century for the Dukes of Atholl.

This area is totally big tree country with Douglas Firs being some of the tallest in Britain. The woodlands are looked after by the National Trust for Scotland and it’s free to explore.

As soon as we arrived I don’t know how many times I said the word ‘wow’. I planned to practise with my camera using manual settings and a tripod. Every corner I turned I had to stop and take photos.

There are a variety of walks to choose from with longer walks being an option if you wish. This part of Perthshire has over 30 miles of trails to explore.

As I walked through the woodlands, surrounded by the tallest of trees, I felt like I was in an enchanted wood. It reminded me of childhood stories I read by Enid Blyton about the magic faraway tree.

Autumn at The Hermitage is a contrasting mix of greens, yellows, golds and browns.

As I wandered deeper into the woods it became even more beautiful.

I walked under this magnificent bridge and couldn’t believe there was yet more breathtaking beauty in front of my eyes. I took far too many photos, but you can see why! My husband took many photos too, so it was a joint effort.

As I approached the folly Ossian’s Hall, built in 1757, it looked like you couldn’t open the door at first.

Then I walked into the most amazing real life picture of the Black Linn Falls.

If I was living in Middle Earth I would have thought I’d found the Eleven Realm Rivendell. The powerful water was rushing down the River Braan very loudly.

There was going to be a wedding taking place here that day. I started to wonder if the couple would hear each other saying “I do” …

If you’re lucky you might even see salmon jumping up the falls. I did see one but didn’t catch it on camera.

Dictionary.com has this definition:

“a legendary hero and poet and son of Finn, who is supposed to have lived during the 3rd century a.d., represented in Gaelic poems and in imitations of them written by James Macpherson in the 18th century” 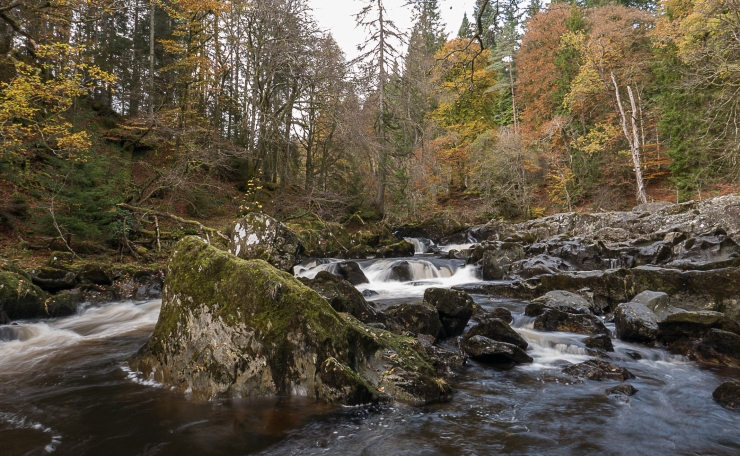 Can you see anything unusual about this tree stump?

Look at all the coins wedged into the wood. So, money does grow on trees after all?

We followed the woodland path looking for Ossian’s cave next. Everywhere I turned the trees, fern, moss, water and rocks impressed me. 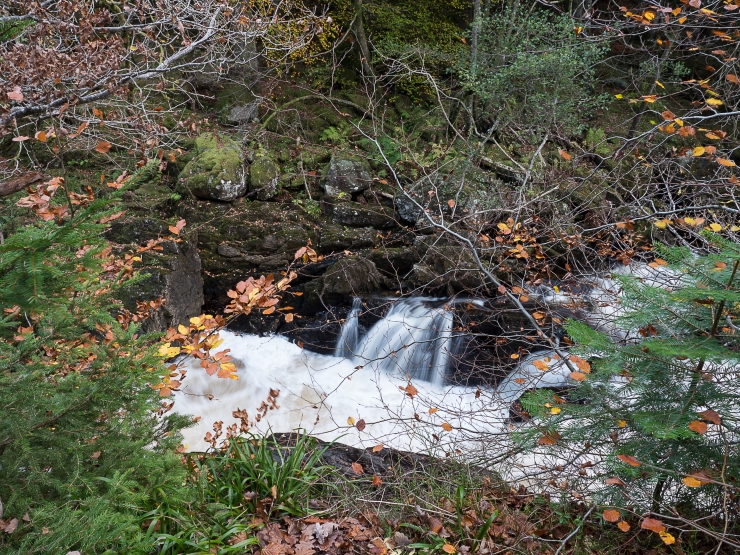 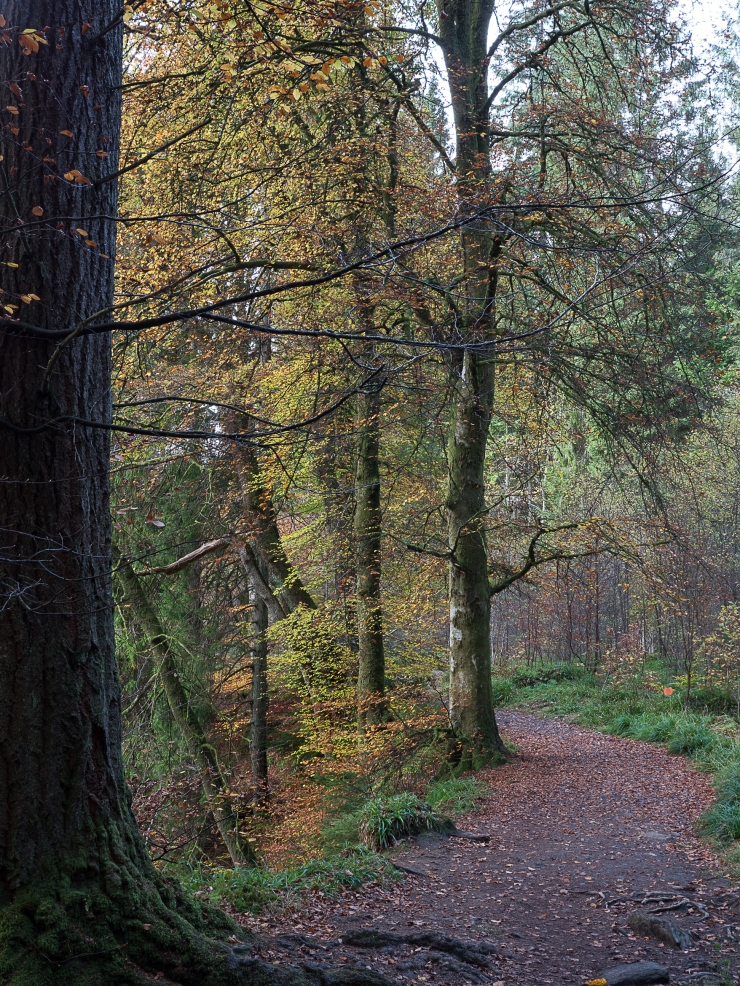 When we reached Ossian’s cave I got a bit of a fright. I peeked my head into the cave window at the back and someone was inside.

I walked round to the front of the cave and the sunlight was shining in, highlighting the back of the cave. Now, to me, the highlighted rock at the back looks like a face of a man with a beard, half closed eyes and smiling. Can you see it?

This artificial cave was built around 1785. It was added to enhance the visitor’s experience. The rocks in the photo below are known as Ossian’s Seat. They are perched on the banks of the River Braan. A large high seat with a view! 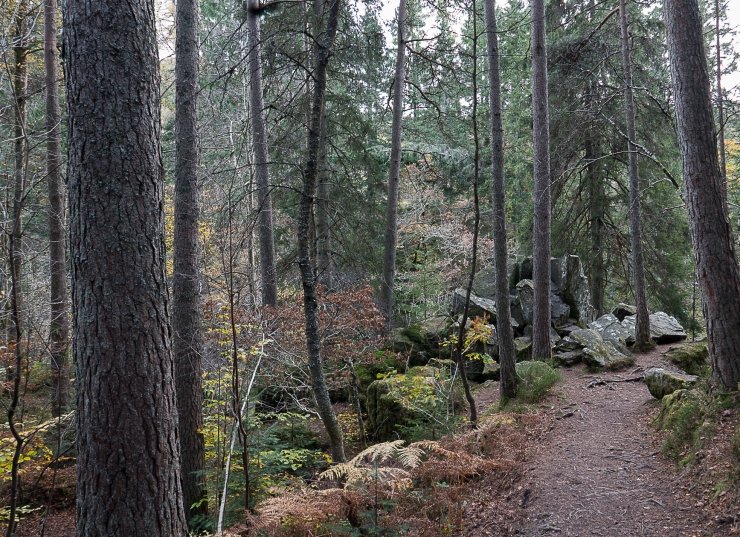 We continued along the Braan Walk (green waymarkers) to the Rumbling Bridge.

These woods were definitely starting to look like Middle Earth … the trees have faces!

We eventually came out of the woods and into the open land. The trees and fern were slightly changing colour. I felt lucky we had this lovely day to explore, especially in October!

The Rumbling Bridge very was high. I felt dizzy looking down both sides of the bridge, but liked watching a little leaf floating down towards the water. 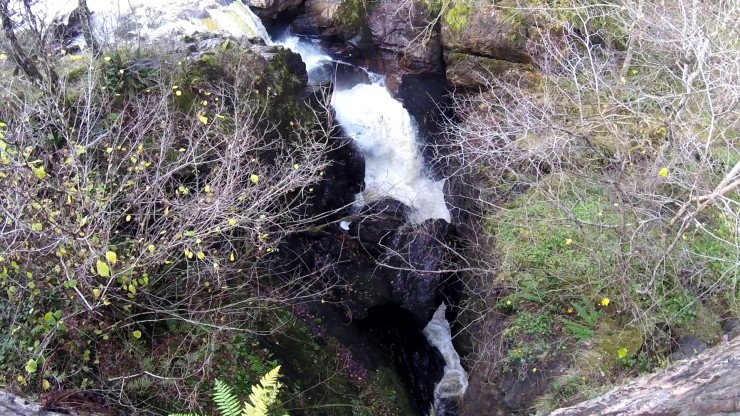 We found yet more beautiful woodlands near the Rumbling Bridge. 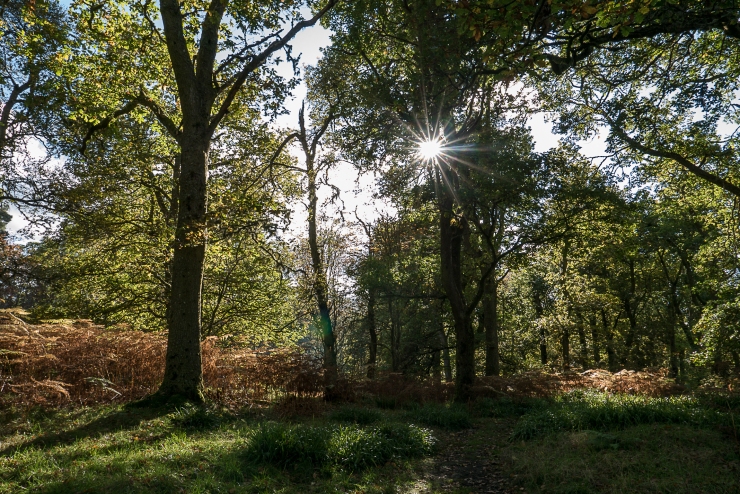 Our last stop was the breathtaking Killiecrankie woodland gorge to take some photos of the little green footbridge over the River Garry.

There’s a car park at the Garry road bridge then you have access to a beautiful river and woodland walks.

This area is known as the Linn of Tummel where the River Garry and River Tummel meet. There was a signpost under the bridge listing the following walks:

Sadly we didn’t have time to explore these walks but we did walk down to the green footbridge. That was an experience. There was a sign saying no more than 10 people at a time on the bridge. I was standing taking photos and four people walked past me, I could feel the bridge bounce. Beautiful though!

The Garry road bridge is a popular place to bungee jump or drop and swing. Bungee Jump Scotland is the place to visit if you fancy trying this. It’s a long drop down …

A group of people were dropping and swinging off the bridge and I recorded someone dropping:

It looked so scary but also fun, I think. Could this be a new peak challenge for me next year? I’m not sure if I could do it. Would you?

I loved it here, it was so calm and peaceful (after the screams of falling). It was mesmerizing sitting on the rocks and watching the golden leaves float down the river.

We had to leave though as it was a two hour drive back home again. You can also visit the Enchanted Forest in autumn. Faskally wood in Pitlochry is transformed into a magical experience of light and sound and well worth seeing. We’ve been twice before and loved it.

This post is a small snapshot of two day trips to this beautiful shire, there’s so much more see. Check out the Visit Perthshire website.

The heart of Scotland has totally captured my heart.

156 thoughts on “A golden autumn in the heart of Scotland”